This site was first created in 2017 as a place to host cryptocurrency nodes for small coins along with graphs to visualize the health of their associated blockchains. The following is a screenshot of what the site looked like in those early days. 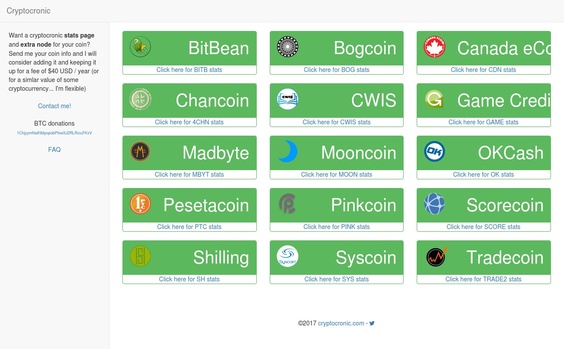 As you can see, it ended up consisting mostly of shitcoins that have since dissappeared or remain relatively obscure. Today, I am just using the site as a storage place to hold my research on cryptocurrencies I have a personal interest in. This does not mean you should invest in these coins, just view this another resource you can use when doing you own research. I only hold a few coins and not necessarily all the ones listed on this site. I'm just here for the tech!

My alias is Cryptocronic, but my real name is Marko, and I am a (retired?) web application developer living in Canada with an interest in cryptocurrencies. I remember reading about Bitcoin in 2011 but did not take any active interest in pursuing it until 2016 when a job opportunity re-introduced me to it. During the end of 2016 is the only time I put any money toward buying coins and the next year I withdrew ten times the amount I had put in. I have since then continued to occasionally trade my remaining coins but mostly HODL what I have left.
Ideologically, many see cryptocurrency as right-wing libertarian leaning. I personally view myself as left-wing with a touch of libertarian tendencies and I support groups such as Crypto Leftists.
I helped create Madbyte (MBYT, which later swapped to MADX) and MadCapX.com. I write the technical profile section of the MadCapX investor research newsletter. Believe it or not, I have never personally sold or traded a single Madbyte asset. For learning purposes, I also created CryptoWisdom coin (CWIS) which I swapped to StarGazer token (STAR). I have also never sold/traded either of those. I am stating these facts so that nobody can says I am a rug-pulling crypto developer. I do this to learn, not to profit financially. There are a LOT of scammers in this space and I do not wish to be included amongst them. With all that being said, I am still willing to consider honest job or work opportunities in the cryptocurrency field. Contact me if you like what you see!
©2017-2023 cryptocronic.com · · · webcronic.com